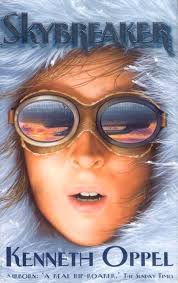 Cabin boy Matt Cruse is given the opportunity of a lifetime when he spots the Hyperion, a ghost ship on a routine cargo route to India. The setting of this story is in an 18th century Victorian England. There is a twist however, a gas called hydrium, lighter than hydrogen, has been discovered, leading to the dominance of zeppelins and blimps. Matt partners with Hal, a strong headed captain to find and recover the treasures inside Hyperion’s holds.

The adventure is fraught with danger and romance keeps the reader on the edge of his seat until the very last page. This book is a high energy action-adventure book suited towards teens and young adults. It is very fast paced and demands the reader’s attention. Once you start, it’s hard to put the book down until the very end. Overall, it is suitable to anyone looking for a good leisurely read. 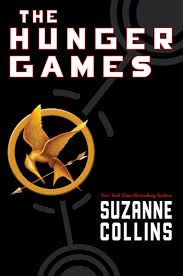 The Hunger Games is an intense book about a girl whose sister was chosen to participate in a deadly annual “hunger game” where 24 participants need to compete to live and win the games. When she doesn’t want to see her sister go through this horrible experience, she volunteers herself.

The book itself is very interesting and fast-paced, which is enjoyable for people who like to read about action (and maybe some violence). Some parts of the book seems a bit unrealistic and a bit blurry and unclear. It can also be confusing if it is your first time reading. However, overall, the wording and synopsis is very creative and is always intriguing. I enjoyed reading this book a lot, and its sequels are just as enthusiastic. I recommend this book to people who like reading about fantasies and dystopian words.

Ender Wiggins, a young boy living during the time when aliens known as buggers terrorize Earth, sticks out from the other characters from the beginning of the story. After being recruited into Battle School to train to fight off buggers, it’s clear that Ender holds numerous special qualities in him. He is a fast learner and manages to outsmart older students during battle games used for training. Ender manages to move up in rank very quickly, but he is constantly challenged both physically and mentally by “the adults” and jealous students as he continues his destiny to become a hero for humanity. I would recommend this to students who like adventure, and Sci-Fi. This book is well written and really conveys everything that the main character, Ender, is going through. It’s interesting to read through the book and see how Ender solves his challenges and continues to complete seemingly impossible tasks.

An old Cuban fisherman named Santiago has gone 84 days without catching a fish. His loyal apprentice, a young boy, is forbidden by his parents to work with Santiago because Santiago has not caught any fish for so long. So, on the 85th day, Santiago ventures into the Gulf Stream all by himself, far away from shore, determined to break his unlucky streak. Santiago soon finds himself in an epic battle against a gigantic, majestic marlin, straining the limits of his endurance and skill.

The Old Man and the Sea is a must-read for everyone, and not just because the book was awarded the Pulitzer Prize. The Old Man and the Sea has memorable characters, heart wrenching moments, and an unforgettable plot. The interaction between the old man and the young boy is heartwarming and both the physical and mental strain Santiago suffers from during the struggle against the marlin are meticulously detailed.

Le Cirque des Rêves, or the Circus of Dreams, is the main setting for this book. Renowned magicians Hector Bowen and Mr. A. H. thrust their adolescent wizard proteges Celia and Marco into this fairy tale-like arena where they take part in a deadly competition with strange rules unbeknownst to the two of them. Celia is bound to the circus and plays the part of the illusionist, adding tents and creating mysterious wonders from the inside while Marco works from the outside in, manipulating the stakes and creating marvels that rival that of Celia’s. Despite being fierce opponents the two tumble headfirst into love, disrupting the delicate balance that lies between the circus, the players, and everyone in between.

To be honest, I wouldn’t recommend this book to anyone who opened it up looking for a romantic read—which was what Erin Morgenstern intended it to be. While her descriptions of the circus are so vivid I can almost visualize the ice gardens in front of me, she spends little time focusing on the actual plot or character development. Celia and Marco’s exchanges consist solely of cryptic oddly-worded messages no one but Morgenstern seems to understand, so readers have a hard time both believing and understanding their supposed love. While I feel like a story of this genre should be just confusing enough to keep readers waiting anxiously for explanations, The Night Circus only seems to perplex readers with a hodgepodge of vague plot twists, strange trips to the spirit world, and overly descriptive circus tents. 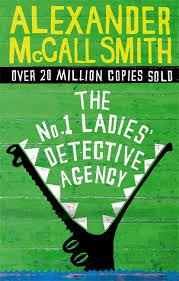 Mma Precious Ramotswe is a proud citizen of Botswana. With the money she obtained from selling her father’s cattle, she creates a detective agency. This book follows Mma Ramotswe’s cases as a professional detective with numerous subplots interwoven in, about topics such as the protagonist’s struggle with her hateful past and a newly blossoming romance. We follow her adventures with a husband eaten by a crocodile and a kidnapped boy just to name a few, and see an emphasis on the national identity of characters, femininity in a masculine world, and the native traditions in coherence with modern society. “I would actually not recommend this book to common mystery lovers. The mysteries in this book are not the glamorous kind that one would expect from detective novels, and as Mma Ramotswe puts it, “”Our job is to help people in need to resolve the unresolved questions in their lives. There is little drama in our calling […] and those who are looking for romance should lay down this [book] at this point and do something else”” (Morality for Beautiful Girls, 59). On the other hand, the mysteries of people in this book are largely unorthodox, focusing on the common worries of common people, making this book more realistic and interesting at the same time.

It’s the year 2044, and the real world is an ugly place. Like most of humanity, Wade Watts escapes his grim surroundings living in stacks of houses by spending his life in the OASIS- an online utopia that lets you be anything you want to be, a place where you can enjoy life on any of thousands of planets. Wade dreams of discovering the egg- the ultimate lottery ticket that lies concealed within this virtual world. Somewhere inside this giant online playground, OASIS creator James Halliday has hidden a series of puzzles that will yield massive fortune and remarkable power to the first person who can unlock them. For years, millions of people struggled to obtain this prize, but came away with failure. All of a sudden, Wade is able unlock the first puzzle. Immediately, the whole world finds out about his achievement, and the hunt turns wild. Many competitors join the hunt, all once again motivated to find the egg. But, there are certain opponents who would abuse their privileges and wreck the OASIS upon attaining the egg.

This book is a one-of-a-kind novel you have to read. Very original and action-filled, this book will take you on an unforgettable adventure. By creating a mash-up of an advanced but poverty filled future, mind-boggling puzzles, video games, heroes, ‘80s culture, a virtual paradise, and so much more, Ernest Cline’s novel is sure to grip readers from beginning to end.