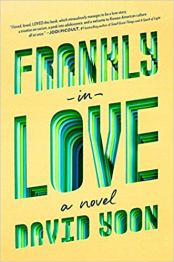 Frank Li is a proud nerd in his senior year.  He and best friend Q spend their days in AP classes and afternoons playing D & D and doing other nerdly things.  But behind all the normalness that is friendship is a complicated web of family — Frank’s family.  The Li’s, whom Frank has given a collective name “Mom-n-Dad” are immigrants from Korea, just like the rest of their friends.  They don’t socialize with non-Koreans; not only that, they’re outright racist, which enrages Frank and makes relationships (friend and romantic) tricky, if not near impossible.   So what happens when Frank falls for a non-Korean girl?  Read the book to find out.

I recommend this book to boys and girls alike, and especially to readers interested in race relations from a 1st generation American perspective.  Yoon is a philosophic writer, and I think you’ll be impressed with his insights on all kinds of love under pressure.

From well-known mystery writer Agatha Christie, this murder mystery captivates anyone who comes too close. The narrator of this book, a matronly nurse, is called to a dig site excavating an ancient Mesopotamian palace to care for the head archaeologist’s seeming delusional young wife. She fears that someone is haunting her or trying to kill her, but her fears are dismissed as irrational. When she is indeed found murdered in her own room, the narrator assists the famous Hercule Poirot, a well-known detective, in investigating the rest of the colourful suspects and deducting the murderer’s plot.
This book is full to bursting with lovely descriptions, interesting and deep characters, and well-done yet subtle foreshadowing and planted evidence for the multitude of plot twists. The final reveal is suitably satisfying and leaves the reader smug at their own insight yet blindsided by the revelations they failed to catch.

This classic book is highly recommended to anyone who enjoys mystery novels or fancies themselves a detective. The charming stories of human emotion will touch all readers alike. As a fascinatingly complex and involved mystery that focuses more on the clever moves of the detective and evidence gathered than gristly scenes, everyone should find this book accessible and not alarming.If you lack the stomach for horror but enjoy classic mystery, this book is undoubtedly for you- read it at earliest opportunity.

In this book, Gaiman has assembled an amazing collection of some of his favorite short stories about the fantastical creatures of fantasy. From the mystic to the monstrous, the menagerie in these stories are intriguing, entertaining, and not the least bit unsettling– and all are written by amazing (if obscure) authors in illustrative ink.

Any lovers of fantasy or horror would certainly not go amiss in picking up this collection. These stories contain elements of both, and lovers of either genre will be captivated.

Magpie’s life just keeps getting worse.  It started with her father’s infidelity and mother’s alcoholism, and then that night at Brandon Phipp’s party…that changed everything.  Since then, Magpie is barely holding it together.  The only thing that seems to help is writing about her ideal getaway place, one where none of life’s blows struck anything, one with all the comfort and none of the pain.  To Magpie’s amazement, there is such a place, and to get to it, you imagine a door.

I recommend this book to people who like realistic fiction with a twist of fantasy, and people who like a psychological challenge.  I think I got the most out of this book when I thought about the lengths people are willing to go to to survive emotional neglect and abuse. (The author uses the short story “Where are you going, where have you been?” by Joyce Carol Oates as a device to further this–if you haven’t read this short story, do it.  It will help you make some important connections.)  Magpie is an interesting character that comes to terms with her problems in a way I wasn’t expecting.  Don’t expect a happy ending!

In a fabulous fantasy realm, with wonderful wizards and dragons, a despotic Mr. Chesney forces the denizens to transform their lives, nations, and homes into something resembling a swords-and-sorcery Tabletop RPG or video game every year. Complete with Dark Lords with one unlikely weakness, armies that wait until the adventurers are in sight to begin fighting, and nations helpless until a small band of heroes come to save the day, the book chronicles the struggle of the inhabitants of the world to free themselves from Mr. Chesney and the parties of ‘adventuring’ tourists rampaging through their world.

This is a wonderful book, with an amazing premise. I highly recommend this book to any readers of fantasy, and any fans of The Hobbit, The Lord of the Rings, or anything else with magic. Despite the high-fantasy vibe, the book is dark and grim, and gives a look at how the NPCs regard the so-called adventurers.

Andrew’s Rating: This book is worth a solid 5/5

This is the first book in De Muriel’s Frey and McGray crime novels set in Scotland at the turn of the 19th century. The reader is introduced to inspector McGray in a chilling retelling of the events that caused the brutal death of his parents and his sister’s mental collapse. Then we move to London, several years later, where Frey, who has jumped from career to career to settle into detective work, learns that the new head of the Criminal Investigation Department (CID) is certainly going to get rid of anyone who had ties to the former chief (and this includes Frey). The city is currently rocked by brutal murders committed by Jack the Ripper, but in Scotland, it looks like a copycat murderer is on the loose. The last thing the police want is to terrify the already frightened population. Instead of losing his job completely, Frey is sent (unwillingly) up north where he will work with McGray, the head of a special department that deals with supernatural crime, to solve the mystery quickly and quietly, keeping the news out of the press. McGray and Frey visit the site of the murder; the body has been sent home to Italy, so they can’t have an autopsy done. They must work with clues and wait for the crime scene photographs to be developed. The murdered victim, Fontaine, was a violinist, and had his throat slit and some of his entrails removed. According to the housekeeper, he had been playing music described as “poking knives” and reveals that it sounded as if more than one musician had been playing, even though there is no sign that anyone other than the police have entered or exited the room since. On the carpet near the music stand, McGray finds a devil’s mark sketched in blood. This and other clues lead the detectives to question the victim’s friends, all violinists to whom Fontaine bequeathed his collection of fine violins, among them an Amati with a cursed past. Soon another murder occurs, just like the first. Now it is a race against time; Frey and McGray must solve the mystery before any more deaths occur.

I recommend this book to anyone who appreciates murder mysteries.  Don’t expect Frey and McGray to be anything like Holmes and Watson.  Also, while the plot is great, the behavior and language of our two protagonists doesn’t fit with the historical period.  De Muriel takes some liberty to make his characters more accessible to our times.

This book is a memoir of Lara Prior-Palmer’s 2013 experience in the 1,000 km Mongol Derby, a grueling 1-stage horse race across the steppes of Mongolia, with 25 obligatory horse-changing stations. Ms. Prior-Palmer had no long-distance riding experience, and decided to apply on a whim; Lara ended up winning the race as the youngest, first female winner, at age 19. The memoir ranges from the end to the beginning and back again; we readers know that she managed to finish the race, and that she won; however, Ms. Prior-Palmer’s narration tries to fill in gaps so that the reader both understands her emotional and physical states as well as her self-deprecatingly limited understanding of the race itself. The book is peppered with lots of short, poetic/philosophical meanderings. The reader enters into the rider’s day-to-day struggles and views the events that make up the race in Ms. Prior-Palmer’s inexperienced eye. After reading this book, or prior to reading it, you’ll want to do a little background research to fill in the rest of the gaps that the memoir doesn’t cover!

I recommend this book to anyone interested in voyages of endurance, self-discovery and long-distance horse racing.  It’s also short (269 pages)!